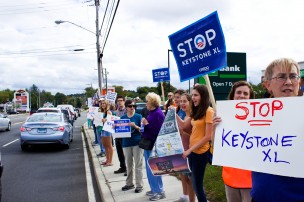 As part of a national day of action against the Keystone XL pipeline, a group of over 60 people, including 20 University students, marched to and protested outside of the Middletown branch of Toronto-Dominion (TD) Bank. The bank is a major investor in TransCanada, the oil company proposing the pipeline, and protestors hoped to encourage customers of the bank to switch banks, forcing divestment and policy change on TD Bank.

Multiple groups formed a coalition to plan the protest. The day of action was called for by 350.org, a platform for grassroots activism. 350.org’s Connecticut branch, the Interreligious Eco-Justice Network (IREJN), and Capitalism vs. the Climate, a group started by Dan Fischer ’12, all brought members from around the state to the protest. For the past month, the groups have protested every other Saturday, visiting locations in New Haven and Hartford. 350 Connecticut (350CT) organizer Ben Martin explained that while energy is currently directed against TD Bank and the Keystone XL, the protestors also have a larger goal in mind.

“We want people to know that a one hundred percent sustainable energy economy by the year 2030 is both possible and necessary,” Martin said. “We want to change the energy discussion in the same way Occupy changed their discussion.”

The diversity of groups that helped organize the protest brought a range of perspectives to the issue of climate change. Some, such as 350.org, approached it from an environmental standpoint; others, such as Capitalism vs. the Climate, came from a class issues view; still others, such as IREJN, offered a moral and religious angle on the issue. IREJN Executive Director Terri Eickel explained her organization’s stance on the matter. 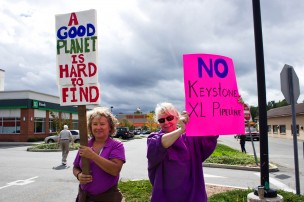 “Religion isn’t just about going to service for an hour a week,” Eickel said. “Every faith tradition talks about taking care of the earth, so my organization views this as a moral issue.”

One of the protestors’ goals is to educate customers, hopefully leading to the end goal of encouraging customers to make money transfers into more local and eco-friendly financial institutions. By informing passersby of the bank’s practices, the groups hope to encourage discourse about the pipeline and its impacts.

The tar sands from which much of the oil would be extracted were a major point of concern for many of the protesters. This energy is considered dirty; according to Ross Levin ’15, an attendee of the protest, the practices by which it has been obtained are having a negative impact on the surrounding areas.

“[The oil extraction from the tar sands] is causing a genocide in Alberta through the slow poisoning of the indigenous people that live in that area,” Levin said.

For many of the protesters, the Keystone XL pipeline represents an issue that goes far beyond climate and energy issues, extending to social and economic inequities.

“It’s important to draw attention to the connection between climate change and the forces behind it,” said Daniel Plafker ’15, another student who attended the protest. “It’s impossible to talk about class struggle without also addressing issues like climate change.”

Fischer, who represented Capitalism vs. the Climate at the protest, noted the impact that unclean energy can have on poorer communities throughout the country.

“The system needs to be more accountable to the communities [it] impact[s],” Fischer said. “The health and environmental impacts fall disproportionately on poorer communities. You don’t see oil refineries or coal plants in the upscale areas, and it’s because of the negative impacts on health they have. The people who are impacted the most are those who can’t choose to live anywhere else.”

The various groups plan to continue their grassroots actions for the next few weeks at other TD Bank locations across the state. They noted that such actions have already changed the discussion and made an impact on the planning of the pipeline.

“The pipeline looked like a done deal, but so many people put pressure on the administration and the key actors in the deal that they had to review their policies,” Fischer said.

The organizers acknowledged that one local protest will not necessarily bring about national change. However, they feel that their efforts are an important part of a larger national movement that has the potential to do so.

“We can only create a national impact with a national action,” Martin said. “That’s why it’s so important for us to be here. If groups from all over the country participate, we have the potential to become a major part of the national discussion on this issue.”