Football Unleashes Offense Under the Lights

In the first-ever night football game in NESCAC history, the Cardinals routed the visiting Tufts Jumbos, 52-9. The night proved to be historic on several levels, as the Cardinals offensive onslaught eclipsed a number of school records en route to making an emphatic statement in their season opener.

Before about five thousand supporters, the Cardinals lined up for the opening kick off and inaugurated the 2013 season as the sunlight waned. The Wesleyan defense was a bit jittery as it began the contest, and the Jumbos came out surprisingly strong on their first drive of the game. The Jumbos caught Wesleyan off guard as they swiftly marched downfield, connecting on their first five pass attempts. Tufts also benefitted from a penalty for pass interference against Wesleyan. This success through the air allowed Tufts to go up 7-0 early on.

That was the end of the Jumbos’ good fortune, however, as the Cardinals dropped 52 straight points, Wesleyan’s highest single-game total since 1998. Although not fully confirmed, records indicate that the Cards’ total of 484 first-half yards in Saturday’s game is the most yardage gained in a single half in school history.

Veteran kicker Sebastian Aguirre ’14 made history of his own, as his seven consecutive extra points establish a new school record for most consecutive PATs made in a single contest. Aguirre’s 20-yard boot on the Cardinals’ opening drive was also the first scoring play for the team in 2013. For his work, Aguirre was awarded NESCAC Special Teams Player of the Week.

Second-year starting quarterback Jesse Warren ’15 led the charge for the Redbirds, completing 13 of his 17 passes for three touchdowns. Warren made Josh Hurwitz ’15 a frequent target, linking up with the fellow junior receiver six times for 103 yards, including a 10-yard touchdown strike.

Remarkably, Warren did all of his pillaging of the Tufts D in the first half, as his swift work earned him the rest of the night off. The first-half effort alone was good enough to earn Warren NESCAC Offensive Player of the Week honors.

Even though Warren was controlling the game, the running tandem of Kyle Gibson ’15 and LaDarius Drew ’15 was a steady force that disrupted the Jumbo defense throughout the first half. Head Coach Mike Whalen expertly alternated his two top-flight running backs to subdue Tufts whenever Wesleyan had possession. 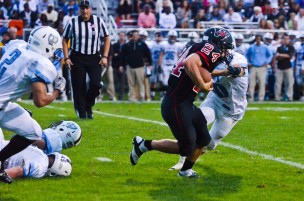 Gibson and Drew combined for 269 yards and three of the Cardinals’ touchdowns. Most notably, Gibson ripped through the opposing defense for a highlight-reel 85-yard touchdown dash that pushed the Cardinals to a 24-7 lead at the beginning of the second quarter.

With Gibson and Drew both entering their third seasons, expectations are high for the Cardinals’ running game to be a potent source of offense. If both runners are able to stay healthy throughout the season, it is highly unlikely that any NESCAC defense will be able to contain these two.

On the defensive side of the ball, Devon Carrillo ’17 sparked the secondary unit with eleven tackles. The Middletown resident will carry a great deal of responsibility this season as the Cardinals lost two of their starting defensive backs from the 2012 season to graduation. If this game is any indication, Carrillo will be a foundational part of the Redbirds’ defense for the next four years.

After the starters put their skills on display for the Cardinal faithful in the first two quarters, Whalen gave some of his younger and inexperienced players the chance to shine under the lights in the second half. The Cardinals exercised the depth of their offense, as second-string quarterback Peter George ’15 connected for four of five passes in his first opportunity of the season. Sophomore running weapon John Vassar ’16 continued the assault on the Jumbos with 40 rushing yards and Wesleyan’s final touchdown of the contest. Vassar’s lone gaffe came in the fourth quarter when he was planted in Wesleyan’s own end zone as Tufts managed to scrap up a safety in the closing minutes of play.

With Saturday’s win, the Cardinals have positioned themselves as a team to beat in the NESCAC. After establishing their dominance in such a forceful fashion, the Cardinals will have a target on their back for the rest of the season, and it is imperative that they not let off the gas pedal.

The Cardinals will play their first road game next Saturday, Sept. 28 at Hamilton College.