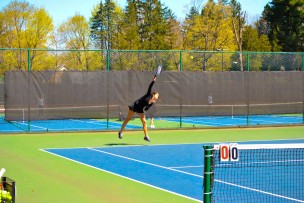 After finishing the 2012-13 campaign on a high note with three wins in its last four matches against Colby, Conn College, and Bates, the women’s tennis team looks to continue to ride its momentum into the new season. After losing only one senior to graduation, the majority of the Cards will be back and hungrier than ever before.

“This year, the team is all in, and we are extremely optimistic about earning a bid to the NESCAC tournament,” said Grace Smith ’14.

In order to make the six-team tournament, the Redbirds will have some work to do, as they are ranked seventh in the NESCAC pre-season poll. This challenge is a tall task, as four of the top six teams in the nation are in Wesleyan’s conference. Contests against powerhouses like Tufts and Trinity will be must-win matches if the Redbirds want to earn a playoff berth. Despite this, no ranking or poll could deter the team’s current positive outlook on the season ahead.

Led by three senior captains, Grace Smith, Nicki Softness, and Kiley Robbins, the team is hopeful that its industrious attitude during the off-season will pay off for them in match play.

“It’s been really fun watching them grow as tennis players and people in their time here,” said Head Coach Mike Fried. “The enthusiasm that the seniors bring to the team is contagious. The team has a renewed focus on chemistry and bonding, which has proven effective so far.”

Smith also noted that bonding proves beneficial for the team.

“I feel that knowing your teammates personally and hanging out with them off the court is essential in having success on the court,” she said.

Hopefully for the Cardinals, laughter and harmony can turn into victories and celebrations, but there will be a lot of hard work first. Before the team left in the spring, Fried approached the captains with an idea of holding all players accountable over the summer.

“After he spoke with us, we created a Google Document where all the players could record how much tennis they were playing and what kind of fitness they were doing over the summer,” Smith said. “This made sure that we were all doing what we needed to as collegiate athletes in order to prepare for the fall.”

Fried noted that he is ecstatic to start the season, as there are a few players who he hopes can make big contributions to the team. Clare DuBrin ’15 played fabulously last year as a transfer from Carnegie Mellon University. Another player to look out for is Smith, whose fearsome serve has made her very competitive at the top of the lineup for the last three years.

Fried is not counting out any freshmen. He anticipates that Olivia Koh ’17 will work herself into the mix of go-to singles and doubles players.

The players are also excited about the addition of Assistant Coach Steve Milo. Milo was a four-year standout at Brandeis University and was a captain for his final two years on the team. As the Judges’ number one singles player, he climbed as high as fifth in the Northeast ITA singles rankings.

“He brings an unbelievable work ethic and intensity to the team [and] the culture we are trying to create,” Fried said. “His ability to spend time outside of practice with team members is a gigantic plus and will be critical to everybody’s individual development.”

The team’s first match this fall will be away at Williams on Saturday, Sept. 21st at noon. The Redbirds are eager to avenge the 7-2 loss they suffered last year against the Ephs. This matchup is marked on many of the players’ schedules because their Little Three rivals have won the last six NCAA Division III championships.

“It’s good exposure for us to that level of tennis and it’s also good for us to get comfortable against that kind of tennis,” Fried said. “It will also be imperative that we learn how to keep our nerves down in tight matches, so that we can have success against the rest of the NESCAC teams.”

With the attitude that these Cards have, it will be a season full of excitement as Fried attempts to carry over their late-season play from last year and rebuild Wesleyan women’s tennis into a household name.