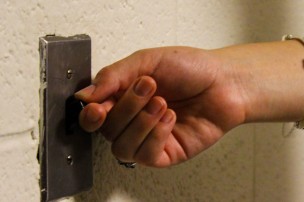 In the waning days of August, the University welcomed home nearly 2,900 students for the fall semester all prepared to resume activities, jump into challenging classes, and reconnect with old friends.

Those 2,900 students are also 2,900 consumers. Between Internet access, printing, heat, light, and other resources, students are users and, more often than not, wasters. They might leave lights on, spend a few too many minutes in the shower, or crank up the air conditioning to frigid temperatures, diminishing efforts to make the campus more eco-friendly.

Through a variety of new methods, however, Wesleyan’s Sustainability Office is attempting to make students more conscious of their energy usage.

The Sustainability Office was founded in 2012 to promote the integration of sustainability into all facets of campus life, working with students, faculty, and staff to support programs and develop new initiatives. Currently, the office supports a number of goals to try to eliminate waste and promote environmental thinking, beginning with its most recent endeavor last spring.

Just before graduation this past May, Nathan Shane ’13 approached the Green Fund, an organization funded by students to aid sustainable initiatives each year, with a proposition. Shane noticed a sticker next to one of the light switches in his house that served as a reminder to turn off the lights. He thought that expanding this initiative to all woodframe houses would help seniors conserve more electricity.

Wesleyan’s Sustainability Coordinator and advisor to the Green Fund Jen Kleindienst saw promise in the suggestion. She enlisted the help of Green Fund member Brent Packer ’15 and Sustainability Intern Kate Weiner ’15, who worked throughout the summer to develop stickers for senior housing.

“We wanted to do stickers because, although I think many students at Wes care about energy conservation, it’s sometimes easy to forget to turn off the lights when you leave the house,” Weiner wrote in an email to The Argus. “Having prompts next to light switches, especially in the kitchen and living areas in senior housing, has proven to be a really successful measure at schools such as Cornell and the University of Washington.”

Weiner, Kleindienst, and Packer worked closely to develop prompts and messages that would appeal to students who weren’t already thinking about energy conservation.

“We talked a lot about social marketing and about what types of messages appeal to people,” Kleindienst said. “If [energy conservation] is not already your mindset, you might just ignore it. There are different ways of talking to people to have the message fit in with their frame of thinking.”

Packer also incorporated the idea of behavioral economics into the framework of the stickers.

“The stickers are based off proven research articles,” Packer explained. “One uses ‘social norm’; subconsciously [students] read that and they think, ‘Oh! I don’t want to be the outlier, I want to be part of the majority.’ Studies have shown that when the opposite action is the negative action and the minority action, people go along with the majority.”

The stickers do not have a solely environmental agenda; their messages will, in fact, help support financial aid at Wesleyan, thanks to the efforts of Wes to Wes.

Spearheaded by Ellen Paik ’16, Wes to Wes, an initiative begun last spring, has a simple mission: The money saved from conserving residential energy will be contributed to financial aid, attempting to combat Wesleyan’s shift from need-blind to need-aware admissions in the past year.

“It turns out that [about] 20 percent of what Wesleyan spends on energy is wasted, and that 20 percent of wasted energy budget is the equivalent of approximately $1.6 million, which is just a huge waste,” Paik said. “President Roth will match whatever we save directly to financial aid.”

Weiner and Kleindienst hope this extra incentive will serve as an important reminder to students to conserve. Although it is too early to garner concrete data on the stickers’ success, many are optimistic. The Wesleyan Sustainability Office plans to procure reports bi-annually, in the winter and summer, in the coming years.

The light switch initiative is not the only project the Wesleyan Sustainability Office has in the works.

A competition called “Do It In The Dark,” run by the Sustainability Interns, has been a fixture for the past few years. Previously, the competition pitted senior houses against one another to see who could use the least amount of energy at home. At the end of each month, the house with the lowest energy usage would receive a prize, usually a gift certificate to use in downtown Middletown.

Kleindienst and her team realized, however, that the majority of wasted energy comes through heat, which can be very difficult to track on a monthly basis if a house heats with oil. The competition will thus be shifted from a monthly competition to two semester-long duels, from September through November and then from February to April. The interns feel that this will provide more viable data and a greater incentive to conserve energy. The prizes are currently undecided, but the group is open to accepting ideas from students.

The Sustainability Interns are also excited to promote the new partnership between “Do It In The Dark” and Wes to Wes to increase campus discussion about conservation. The team will create a YouTube video addressing the topic, to be released in the coming weeks.

In another collaboration with Wes to Wes, they have created a magnet addressing “Ways to Save,” which was distributed during orientation to freshmen and is available for upperclassmen around campus.

Several initiatives around campus are using online tools to keep people in touch with their energy use. For example, Associate Professor of Environmental Studies, Government, and East Asian Studies Mary Alice Haddad organized her own contribution to the University’s sustainability efforts. Modeling her project after Chinese environmentalist Ma Jun’s Eco-Map, which demonstrates how much factories pollute their environments, Haddad created an Eco-Map for Wesleyan consumption.

The map can be accessed from Wesleyan’s website and calculates how much energy is being consumed in dorms and houses. Greater energy use is shown as red, and less energy use is shown as green. Students can use this tool to determine their parts in campus consumption, and it can also play a role in the “Do It In The Dark” competition.

Additionally, in mid-October, the Sustainability Interns will launch an app called JouleBug. Functioning as a sort of online game, students can win virtual badges for participating in various types of energy, water, and waste conservation and compete against their friends. The app will be available to anyone on campus.

As most initiatives are geared toward upperclassmen housing, Kleindienst said she is always looking for ways to reduce wasted energy in the dorms. Each dorm now has an energy monitor in the lobby for students to monitor their consumption.

Kleindienst and her team are planning an initiative to be launched next fall addressing peer-to-peer sustainability education. “Eco Facilitators” will work to encourage sustainable behavior changes with students, particularly freshmen, once they arrive on campus.

The Sustainability Office ultimately aims to encourage students to stay aware of their waste and encourage a more conservational mindset. Kleindienst wishes to stress the importance of keeping windows closed in winter.

“Heating is the biggest energy user [on campus], and even though you are not thinking about turning on the heat yet on this nice sunny day, we waste a ton of energy by opening windows in the winter,” she said.

When winter hits, and even as fall begins to envelop the campus, students must be especially conscious of their energy habits. Cutting those extra minutes in the shower may help provide another student with an academic opportunity.