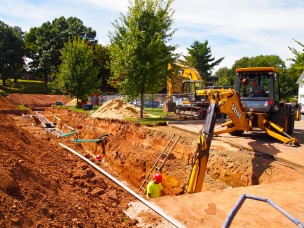 Those passing by Foss Hill recently may have wondered about the enormous pile of dirt towering above a fenced-in enclosure on the edge of the field. Construction workers are repairing a central steam line that failed in January of last year. The steam line itself consists of three 444-foot-long segments, making a total of 1,332 feet of piping to be installed. One segment runs from the power plant on Williams Street and services Nicolson 6 and 7 and Hewitt 8, 9, and 10, and the other two segments carry the water condensate produced when the steam’s energy is consumed.

The replacement pipe was designed over the summer and delivered from Texas at the end of July; the project has continued ever since. Construction is expected to be completed by Sept. 20. With the excavation complete, the next step is to finish welding the pipe together and installing it in the ground. The new piping will run from the corner of Hewitt 10 to the northwest corner of parking lot E.

“We expect to have that pipe all welded together by the end of the week,” Staye said. “We then have to place things called thrust blocks, which are big masses of concrete that anchor the pipe at strategic points, so that we can control its expansion and contraction within the design. When that’s done, we fill everything back up, seed it, and go away.”

Though the budget for the pipe’s reconstruction is $342,000, a significant sum, the project is itself a cost- and energy-saving measure. Since the backup boilers in Hewitt 9 currently in use are less efficient, the University is losing money—and wasting water condensate, which might normally be reprocessed—as long as the steam line is out of commission.

“The difference is about $8,000 a month,” Staye said. “It’s more expensive to run the boilers than it would be to have the building connected to the power plant, which is why we’re doing it…. It’s the right way to do centralized utilities.”

Steam line maintenance has been a large part of University grounds upkeep; several specialists have been involved in the efforts. The work requires significant excavation and therefore threatened several trees near the new steam line. A tree specialist moved two trees from the Foss Hill location and transplanted them to the Center for the Arts courtyard.

In the meantime, however, the construction has resulted in some minor inconveniences for the residents of Hewitt, which is located near the site. Coexisting with the site means walking around the fencing, which blocks what was once a direct route down Foss, and as becoming accustomed to the sounds of construction from 7:00 a.m. to 5:00 p.m. every weekday and from 7:00 a.m. to 3:30 p.m. on Saturdays.

Abby Reed ’16, who lives on the third floor of Hewitt, has mixed feelings about the construction. Though Hewitt was Reed’s first choice of residence hall, she and her roommate were not informed about the project beforehand and have been adjusting to the surprise since their move-in this August.

“We have the third floor balcony that hangs over the construction, so we have a full view down into it, which for a while was really annoying because you look out and want everything to be pretty, and all you have is a bunch of dirt,” Reed said.

Alexis Concordia ’16, whose room is in the basement of Hewitt, felt similarly. She, too, was unaware of the project before arriving on campus and has since been adapting to the din.

“You can definitely hear the construction, but I turn on a big, loud fan and kind of block out the noise,” Concordia said.

Reed added that her situation affords her a unique advantage.

“Other people, when they’d come to visit us, they’d say, ‘Cool, we can see what’s going on down there! We had no idea before,’” Reed said. “I guess it’s glass half-full, glass half-empty, the way you look at it.”