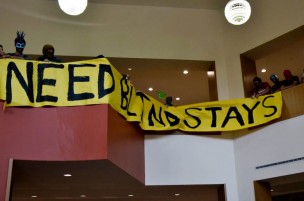 In the wake of the University’s decision last year to adopt a partially need-aware admissions policy, many community members expressed concerns that the incoming class’ composition would be different from that of past years and would diminish diversity on campus. The Office of Admission recently released its profile of the Class of 2017, revealing that 51 percent of admitted students had applied for need-based aid, marking a six percent decrease from last year.

These numbers have sparked worries among some students, who view these changes as a confirmation of their concerns regarding Wesleyan’s socioeconomic diversity. However, both President Michael Roth and Dean of Admission and Financial Aid Nancy Meislahn said that they cannot trace these numbers to the new need-aware policy or any other specific cause.

In a blog post dated Aug. 27, Roth noted that this first year of partially need-aware admissions proceeded as anticipated.

“This was the first class admitted under our new need-sensitive admissions policy, and we proceeded exactly as we said we would: We read all files in a need-blind fashion and, as predicted, ended by being need-blind in roughly 90% of the decisions,” Roth’s post reads.

In both Early Decision I and II, the admissions process remained completely need-blind.

Meislahn explained that when implementing the new policy, the University focused on  maintaining a similar group of applicants from which to choose as it had in previous years.

“If we had the same pool to pick from, we’d be in the best position to minimize the impact of having to be somewhat need aware in terms of that 10 percent of the class,” Meislahn said. “That was a real success for us, the fact that when we look at the application pool, that 4.5 percent increase [in the number of applicants] was pretty much distributed across the entire pool.”

In his blog post, Roth similarly noted the new policy’s apparent lack of effect on applicants’ interest in the University.

“As always, we are meeting the full demonstrated financial need of all our students, and since there were considerably more financial aid applicants this year than ever before (6,660 in total), it does not seem that the change in our admissions policy (to be need-aware for roughly 10% of the applicants) discouraged interest in Wesleyan,” the blog post reads.

“I think we felt good about the group that was being offered admission,” she said. “But those who ultimately said ‘Yes,’ that did impact slightly the numbers of students of color and the numbers of [those who are] first generation. [In regards to the yield-predicting models], we’ve got a good foundation to build on, but we didn’t get it quite right. The goal is to get it as close to quite right as we possibly can.”

Roth acknowledged the unexpected trend as well and said that he did not attribute it to the introduction of need-aware admissions.

“Students to whom we offered the most aid (meeting their full need) were the ones who disproportionately chose to go elsewhere,” Roth wrote in his blog post. “Based on what we know about our admission and financial aid model this year, it would be hard to argue that the drop was due to our policy change.”

Meislahn agreed that it is difficult to pinpoint a reason for this drop in yield.

“It’s a relatively small cohort—we’re talking about a difference in something like 20 students—but I wish there was something I could point to and say, ‘Aha!’ because then we could fix it,” Meislahn said. “They weren’t impacted by this change in policy… It’s not like they applied to a different set of schools or one of our competitors did something radically different. That’s the real challenge for us moving forward.”

Students are also wondering why so many high-need students decided to decline the University’s offer of admission this year. Leonid Liu ’14 said that he hopes this question will be addressed in the coming year because it speaks to larger issues of diversity on campus.

“I don’t think it’s an anomaly,” Liu said. “If my calculations are correct, there are 54 fewer freshmen on grant aid than last year, which is huge. I really hope the student body and administration take these results seriously, because if we’re reducing the amount we spend on financial aid again next year, as is planned, the trend could continue.”

Both the percentages of enrolling students of color and first-generation college students were also down this year from the past. This year the former was at 37 percent, marking a decrease from last year’s 39 percent, although an increase from the 34 percent in 2010. The latter was at 13 percent, the lowest it has been in the past five years. Meislahn noted a possible correlation between these numbers and the lower yield among students demonstrating the highest need.

“Those are numbers that have gone up and down over time, but both of them are down in this class, and several of those students would have fallen in the cohort where yield dropped,” she said. “I think that’s directly related.”

Roth also noted this correlation in his blog post.

“Given what we know about inequities and income distributions in the US, having fewer than anticipated highest-need students also means a drop (about two percent) in minority representation,” the blog post read. “That particular drop is small, but it’s not what we want.”

Meislahn said that during last year’s round of admissions, the University focused on conveying the message that it would meet the full demonstrated need of every admitted student.

“The fact that [the new policy] didn’t suppress applications from kids who were applying for aid is probably the best indication of the fact that we were able to get the message across,” Meislahn said. “As I look at the increase in the application pool and the fact that it is so nicely distributed…. I think that our message got across, that what was really important is meeting full need.”

Meislahn added that the concept of need-blind admissions is not always well understood.

“Most kids, most families don’t understand it,” she said. “What they do understand, and what is very powerful, is when you say, ‘We’re going to meet the full demonstrated aid of every student who’s admitted.’ Our whole approach this time last year was absolutely to talk about what we do, not to talk about what we’re not doing…. And we’re geared up to do that again—to help students and families understand what it means to meet full need.”

Meislahn noted a victory in another admissions demographic: the number of matriculating international students. Thirteen percent of admitted students live outside the United States.

“It’s far and away the most international class that Wesleyan has ever enrolled,” Meislahn said. “That’s been a very clearly articulated goal, for Wesleyan to be more international.”

Students, including Liu, have noted that the increase in international students is not surprising, as international applicants were considered on a need-aware basis even before last year’s policy change.

Although the Class of 2017 has arrived, the issue of class diversity remains pertinent. Students have also called for more discussion and protest within the University community surrounding issues of diversity, both in general and in the context of need-blind admissions.

Cesar Chavez ’15 said that he would like to see a greater awareness of socioeconomic diversity on campus and thinks students should talk to each other about struggles they might face because of their class standing.

“Just be more vocal about the class differences on campus,” he said. “Make people aware that just because you’re accepted into Wesleyan does not mean that you’ll be accepted into this culture of privilege and elitism.”

Andrew Trexler ’14, who recently published a post on Wesleying responding to the demographic changes seen in the Class of 2017, suggested that there are a few ways that the administration and students can actively push for a more diverse campus. Among his suggestions was the idea that current students could reach out to a network of applicants that University representatives may not be able to tap into.

“As far as I understand, the Admission Office is hesitant to leverage both students and alumni in encouraging people to apply to Wesleyan,” he said. “We at Wesleyan still have a fairly diverse community, and the diverse community we have is tapped into a much larger and probably more diverse community outside of Wesleyan, across the United States and across the globe. In general, most people go home at one point or another and talk with people they know in those communities, and encourage people to think about Wesleyan as a destination. Admissions officers can’t do that on nearly that kind of scale, both for financial reasons and because there’s only a few of them, they only have so much time, they’re really busy, and so on and so forth. So that’s really my main recommendation—to create a better mechanism of outreach, utilizing the resources that we have as a community.”

Benny Docter ’14 agreed that the student body should stand up to defend diversity, stating that the administration has not followed through on its promise to do so.

“At the end of the day…they’ve failed,” he said. “They’ve taken on this responsibility. [Roth] said, ‘trust me in making sure that admitted and matriculated students are a diverse and sustainably representative group as they come into the school,’ and at least at this first pass, this new way of approaching admissions fails in its stated task to preserve real diversity on this campus.”

He also urged students to protest actively within the University and to pressure Roth to uphold the commitment to diversity he has professed.

“We should do exactly what President Roth asked us to do last year, which is hold his feet to the fire on these issues,” he said. “Every student at Wesleyan who believes in equal opportunity in any of its manifestations should think about this really critically, and make it an issue of how they think about campus and what kind of activism they choose to pursue on campus. A passive approach to this issue is going to fail.”