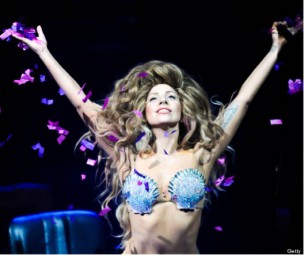 Every September, the annual iTunes Festival at the Roundhouse Art Center in London offers crazy, mind-blowing performances, and this year Lady Gaga upheld the tradition. The one and only mother monster was in charge of starting off the month-long festival as the headliner of the opening day. But is the Fame Monster still capable of topping the charts and dominating the radio stations with her upcoming album ARTPOP? The answer is a big, “Yes!”

However, shortly after, “MANiCURE” started to give me hope by going back to The Fame era, the era of “Poker Face” and “Just Dance.” I remember the first time I listened to “Just Dance” while anxiously studying for my math exam. I stood up right in the middle of the living room and started dancing, creating my own moves. I forgot all about the exam and worries; it was magnificent to have my stress melt away. That’s the first thing I expect from pop music, and Gaga has been fulfilling my addiction ever since.

The highlight of the show was the monumental performance of the title track on Gaga’s ARTPOP. The song reminded me of the reason I fell in love with Lady Gaga in the first place: no matter who you are and what you believe in, music can connect us together in ways words can’t describe.

Gaga is taking a different approach with her new album, whether it’s a catchy collaboration with T.I. on “Jewels and Drugs,” singing about a particular “Swine” in her dark days, or even telling her fans about her nasty “Sex Dreams.” With her upcoming album, Gaga wants to cross the lines of pop music.

“I wanted to set myself free of this box, this box that puts you in pop music,” she said during her performance.

She continued amazing the crowd by releasing the girl under the wigs. She showed her “Louis Vuitton brown” hair, revealing that her reason for putting on a slew of different wigs and controversial clothes was to cover up the pain she still refuses to share because “No need to be a downer, really!”

The show had its own unique standouts: audience members throwing pigs and mermaids to Gaga, and Gaga cutting off the head of the mermaid saying, “We only eat swine, we only eat mermaids here you little monsters.” Watching flying pigs for the first time and dancing to Gaga was awkwardly satisfying in the best way possible.

I always adore Gaga because she has no limits. She sets new bars, and of course we can’t undermine the influence of “Born This Way.” Two years is a long time, and I’m still not completely sure if I’m willing to join Gaga all the way on her trip out of the box. But I’m confident that the upcoming album has the potential to redefine what pop music means to me.

I can see the light at the end of the tunnel, and the light is surely not going to fade away anytime soon. Lady Gaga is finally back to dominate the world of pop once again and she has my “Applause.”

Catch up with the iTunes festival for 30 days of free music. To find out about the ways to watch the shows and the long list of performers visit: www.itunesfestival.com

ARTPOP Comes out November 11, but you can pre-order it now on iTunes.