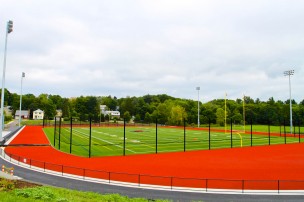 This summer saw numerous additions and repairs to campus, many of which furthered the University’s efforts toward energy efficiency and carbon neutrality. Each year, the University must assess which projects to address during summer construction, and major maintenance priorities are determined by committees formed of faculty, students, and staff.

“The actual number of projects to be completed is dependent on the availability of funding,” said Associate Director of Physical Plant and Facilities Roseann Sillasen. “Much of this work is completed in the summer to minimize interruptions to our academic programs.”

One of the most visible changes is the new track behind the Freeman Athletic Center. Construction on the track began in March and continued over the summer. Project Manager Robert Schmidt described the work performed to produce the new track, which now includes a functional sports field on its turf.

“The scope of work included a new eight-lane synthetic track with pavement sub base, drainage improvements, relocation of long and triple jump outside the field area, a ball netting system, and an additional sprint chute,” Schmidt wrote in an email to The Argus.

Work on the track is not yet complete; new bleachers and steps are scheduled to arrive in the next weeks, and the track will be ready for use later in the fall.

Another area of campus that saw several improvements was the Center for the Arts (CFA), particularly in the rehearsal halls, music studios, tunnels, theater, and print shop. Projects included an asphalt walk replacement, acoustic door installations and finishes, waterproofing, and window replacements.

One significant upgrade was the replacement of the heating, ventilation, and air conditioning (HVAC) in the CFA A Rehearsal Hall. The project required the consolidation of mechanical rooms in the building, the installation of a heat pump and an exterior dry cooler, a new acoustic entry door to the control room, and a restoration of adjacent rehearsal rooms 001 and 003. Sillasen explained that the new system should help the building conserve energy more efficiently.

“[It] will…provide cooling, heating, and dehumidification during the shoulder seasons when the power plant changes from cooling to heating in the fall and from heating to cooling in the spring,” Sillasen said. “At these times, fans operate to provide ventilation, but heating [or] cooling to the CFA is not available.”

CFA Director Pamela Tatge noted that while the work was technical in nature, it has the potential to improve students’ academic experiences in the CFA.

“The improvements to the Rehearsal Hall will greatly enhance the teaching climate for our professors and the learning environment for our students,” Tatge wrote in an email to The Argus.

The CFA also saw some improvements in landscaping: the past years’ inclement weather had caused the area to lose many trees, while more still were lost to natural causes such as disease. Two trees that had to be removed from the area across from the Admissions Office during a steam pipe repair were transplanted to the CFA; two more will be planted within the next few weeks.

“We’re thrilled that four new trees are being planted in the CFA in honor of our 40th Anniversary,” Tatge wrote. “One for each decade.”

Other work done over the summer relates directly to energy conservation, a continuing project that the University has been tackling in phases. This summer saw the completion of phases five and six, which included the replacement of heating systems with higher-efficiency equipment, the replacement of lighting with higher-efficiency LED-based systems, window replacements, and mechanical system modifications in HiRise, LoRise, and the Exley Science Center. Much of the work was done on residential properties, though the lighting installations spanned a wider range of buildings.

According to Utilities and Energy Management Director Peter Staye, the energy-focused work cost $2,766,377 and is expected to reduce utility expenses by $224,691 per year, as well as decrease carbon emissions by 718 metric tons. Staye explained that while the individual projects were small in nature, they nonetheless contribute to the University’s overall energy efficiency.

Wesleyan is a part of the American College and University Presidents’ Climate Commitment (ACUPCC), meaning that it is committed to being carbon neutral by 2050. Energy conservation projects such as those done over the summer contribute to this goal, yet according to Staye, carbon neutrality is not achievable merely through these means.

“That would be a tough thing for the University to do just by efficiency alone,” Staye said. “There would have to be a pretty big cultural change on campus, of how we use energy. As a rule of thumb, campus wastes about 25 percent of the energy consumed annually, just in waste. It adds up pretty quick. It would take a huge cultural shift.”

Even though it may be a drop on the bucket, the financial impact of construction projects like the ones undertaken this summer should not be discounted.

“Five and six [were] relatively small project[s], generally speaking,” Staye said. “In addition to being inherently more efficient, we switched from oil to gas, so there was a significant savings.”