“Company” Sings Its Way Onto The ’92 Stage 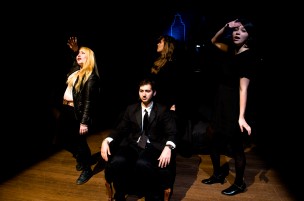 “Marry me a little, love me just enough,” pleaded Mitchell Stone ’16 this past weekend in the ’92 Theater.

If the line seems familiar to musical theater fans, it should; it’s the anthem of “Company,” the 1970 exploration of adult singlehood penned by the master of the genre, Stephen Sondheim (with a book by George Furth). Stone starred as the newly 35 and perpetually single Bobby in Second Stage’s production of this gem, a show that was nominated for 14 Tony awards and won six when it debuted, now directed at Wesleyan by Matt Leibowitz ’14.

Bobby is a character that is easy to sympathize with but hard to like. Thirty-five years old without ever having had a steady girlfriend, let alone any marital stability, Bobby can be a bit petulant about his singleness and his exclusion by his happily (or not) married friends. Simultaneously, he refuses to put himself at risk by committing to a relationship, and the resulting combination of self-pity and blaming others for his victimization can be hard to take (see “You Could Drive a Person Crazy,” the lament of this fact sung in three-part harmony by his girlfriends in Act One). He’s the Ross Geller or (more topical) Ted Mosby type: alternately funny, pitiable, and irritating by turns. “Company,” which doesn’t have a linear plot, teases out the foibles of this man in a series of vignettes between him, his girlfriends, and the five married couples that are his friends.

Easily the most satisfying part of the two-and-a-half-hour production put together by Leibowitz is the fact that of these five couples, it’s hard to find a vocal weakness. Every person in the fourteen-member cast has substantial vocal chops (unusual in student work), and as an ensemble their voices are harmonious and powerful. Presumably this is in part thanks to Leibowitz’s casting (this is his directorial debut, but he has frequently served as a music director for previous shows) and to the work of vocal director Leada Fuller ’14. Ensemble numbers like the opener, “Company,” were particularly enjoyable, and solo numbers were never less than strong. (Although better than most, this production did not quite manage to solve the age-old problem of balancing the orchestra’s volume with its soloists’.)

The one major flaw of the evening was the production’s staging. Musically, “Company” was glorious, but Leibowitz’s direction privileged the music over the storytelling, often merely moving from tableau to tableau rather than creating a living moment. Even the performers who are old hands on Second Stage suffered from the occasional uncorrected weakness; Stone, for example, showed a habit of cheating out and speaking to the audience even on lines clearly intended for his fellow performers. Ben Tweed ’13 delivered a solid performance vocally as Harry but occasionally seemed to be adrift and locked in his own head during his scenes. Justin Greene ’16 has a pleasant voice, but at the end of the scene in which his bride-to-be (Amanda Hayley Sonnenschein ’14) rejects him, he failed to engage with the catastrophe, and the entire beat seemed wide of the mark. This is not to say that these moments were crippling, only that they could have been avoided with more robust direction.

A number of performances, however, were stellar. The standout from the ensemble was easily Christine Treuhold ’13 as the acerbic and embittered Joanne, a wealthy woman now married to her third husband. It’s hard to know whether Joanne is intended as a pseudo-narrator (she is the only one of the ensemble initially willing to concede that Bobby’s negative views on marriage may be just), or whether Treuhold’s natural magnetism and command of the stage made the character appear so. Joanne is an aged rebel past her prime, and Treuhold embodied this idea in her every movement and gesture. Always, Joanne was a half-second behind, a half-second late, pausing for a last glance at Bobby, lingering to deliver a final zinger, refusing to bow to the movement of the ensemble unless it suited her. I have never seen an actress command such a huge chunk of a scene without moving a muscle or saying a word, as Treuhold did in her scene with Stone. Her performance of “The Ladies Who Lunch” brought down the house, earning her one of the few moments of spontaneous applause on opening night. She deserved it.  The song was brilliantly performed (particularly the ending), not just brilliantly sung.

Other standout performances included Sonnenschein’s panicked Amy, and the reliably hilarious Beanie Feldstein ’15 and Dan Storfer ’15 as Jenny and David, a married couple who are, in the scene where we meet them, high as a kite. The moment in which Peter (Matthew Catron ’16), recently divorced but still living with his wife (Helen Handelman ’16) and kids, solicited Bobby for a homosexual experiment was also hysterical. Lauren Langer ’16 has proven herself a solid character and caricature actress, and I was pleasantly surprised by the performance of Regen Routman ’16 as April, the meatiest of the three girlfriend roles. A bimbo but a sweetie, April is a role that could easily shade into stereotype and fall flat, but Routman brought such sincerity to the part that one couldn’t help but love her.

Stone’s performance at the center of this ensemble is more difficult to parse. As I’ve mentioned, Bobby is at times a difficult character to like, and he’s so shut off that it can be hard to distinguish an actor failing to connect with his part from Bobby failing to connect with the people around him. As the play went on, though, I became more and more enthralled by Stone’s tensely restrained smile, his passivity, and his checked movements. He has a strong voice, and in the breaking down of walls during the finale, “Being Alive,” Stone brought actual pathos to the part; despite the lack of assistance from the staging.

Overall, if an experience that was more like a cabaret than a drama suited your fancy, “Company” was sure to be enjoyable, and I don’t think a single person left the theater truly dissatisfied. For a first-time director, and particularly for a group of students tackling Sondheim, the evening was in fact a solid success, and I look forward to seeing more and improved work from many of the artists involved.