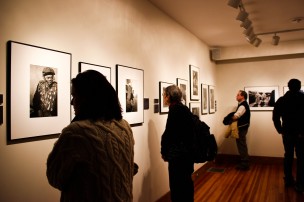 If you visit “Traces of Life: Seen Through Korean Eyes, 1945-1992,” the exhibition on display from Feb. 6 to May 26 at the Mansfield Freeman Center for East Asian Studies, your mind will be filled with questions of realism’s relevance and photography’s ability to portray truth.

The exhibit focuses on Korean modern photography and history. Cabbages used for kimchi lying on the ground, a girl making her way up an alley with a dog, and a merchant carrying a large stock of the most indispensable items of dress in old Korea are just a few examples.

The tension between art, politics, and history, along with the question of realism, comes into play in the exhibit. Curator of Mansfield Freeman Center for East Asian Studies Patrick Dowdey differentiates “life realism” and “social realism” in order to set them apart from more ideologically charged “salon photography” or “social realist” artworks.

“Don’t mistake my meaning that this [exhibit] has nothing to do with the politics,” Dowdey said.

Indeed, despite the lack of direct reference to political events, these photographs reveal many complicated economic and social issues that were relevant in Korea in the second half of the 20th century. The photos show the real lives of people living at that time.

“Though this exhibition is only one slice, I think this communicates the best of showing another aspect of Korea which people usually ignore, both about Korean history of photography and of the culture and history itself,” said curator Chang Jae Lee, a senior designer at Columbia University Press.

The Argus spoke with Lee about the exhibition’s origins and the importance of perspective in a collection of photographs.

The Argus: Can you briefly talk about the process of encountering the idea of curating this photography exhibiton?
Lee: I found this image [indicates cover photograph of the catalog] when I was designing a book on Korea during 1948. There are many places you can search for images in America, but there are not enough of them about Korea. There are some Chinese pictures, lots of Japanese, but not that many Korean pictures. Whenever I need a picture, I always contact Korean museums, but this time, I actually found this through blogs online. The artist posted it online, and it was actually in an exhibition three months ago when I was searching. I contacted the artist; he showed me both the cover photograph of the catalog and the cabbage picture. I was just taken with it and wanted to use it for the book. Then I contacted the museum who held the exhibition and came up with the idea of organizing this exhibition.

A: So what struck you so much about this kind of picture? What’s your urge to express something through this whole set of artwork?
CJL: There are many pictures about Korea during the same period taken by Western and Japanese photographers. The subject matter may be the same, but they are seen only through American perspectives. Their interest to Korea—even to China—is kind of limited, in contrast to how American culture is received in Korea, or maybe in China, too. I want to change that a little bit, by showing pictures of not big institutions or corporations or space, but through pictures of people’s life.

A: So, may I take one more step to say that your target viewers for this exhibition are Westerners who don’t understand Korea very well?
CJL: Yes, that’s the most important. And it’s also for Korean Americans who don’t know Korean; it’s very important for them to understand the history. They may have heard some stories from their parents, and these pictures may show aspects of what they heard.

You[’ve] gotta look at pictures about experience that you can really see. There is an interesting article on koreancutural.org, which is written by I think a second generation Korean American. She said in her article that she has never seen photographs like this. She has seen family pictures, but there were only of her own relatives at family gatherings. In this exhibition, there are photos of landscapes and people that capture the time… One picture says more than a thousand words.