Divestment of Wash. St. May Bring Changes to BuHo and Other Program Houses 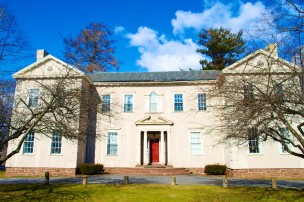 As part of efforts to consolidate Wesleyan’s campus, University officials are considering selling three University-owned houses in the near future. According to Vice President for Student Affairs Michael Whaley, Buddhist House (BuHo), Farm House, and one other residence, located on the northwest side of the intersection of Routes 66 and 3, will potentially be sold. Though changes in the immediate future are focused on these properties, it is possible that additional houses on Washington Street, including Music House, will be affected in future divestment plans.

Ten years ago, the University’s Planning Committee composed a master plan of campus, including a list of steps aimed to consolidate the geographical area of the campus.

“[The University wants to achieve a] firmly rooted sense of place, a well-connected community and to reaffirm the Wesleyan Identity,” the plan reads.

A main focus of the strategy emphasizes centralization of student life by condensing housing in the core of the campus and divesting houses north of Washington Street and in the Designated Village District.

The original plan also included a number of proposals to renovate and landscape pre-existing fixtures and buildings, such as Memorial Chapel, Hall-Atwater Laboratory, and the Public Affairs Center. Some aspects of the plan have been completed, but some modifications have yet to be implemented.

“In 2003 the University began to divest of homes that no longer served our needs,” Associate Vice President for Facilities Joyce Topshe wrote in an email to The Argus. “A number of houses not connected to the core of campus (including several north of Washington Street) remain in Wesleyan’s portfolio for eventual sale as enrollment numbers stabilize in the next four years.”

According to Topshe, several programs have been relocated from houses to halls in the last few years, including Film Hall, Science Hall, French Hall, and Japanese Hall, which were all placed within previously existing dormitories.

Numerous program houses have also been moved from one building to another, such as Turath House which was relocated from Lawn Avenue to Pearl Street last summer.

Although no exact date has been announced, plans to divest a number of houses on Washington Street look likely. One of the program houses in question is BuHo.

“No timeline has been established for this, but Res Life has already begun working to find alternative locations for Buddhist House—their programmatic needs are quite unique and we do not want to face a crisis situation when the plan moves forward,” Whaley wrote in an email to The Argus.

When asked if he received any information as to why BuHo may lose its current home, BuHo House Manager Noah Rush ’14 said he was given multiple reasons.

“Initially, [Director of Residential Life] Fran [Koerting] tried to push the idea that it was for our safety — that there had been robberies and that the crosswalk was dangerous… but then [the administration] also gave me more reasons on [like] the size was too big, we have a lot of space per student, and the cost to upkeep the house,” he said.

Rush attributed a delay in the divestment of the home to a lingering disagreement between Physical Plant and Residential Life (ResLife). According to Rush, concerns over finances have encouraged Physical Plant to advocate selling off some of the houses, whereas ResLife has endorsed program houses, citing contributions that programs have made to the community.

“They’ve had a plan to sell [the house] for 10 years, so every time that ResLife would come say, ‘We need to fix this,’ Physical Plant would say, ‘Why, we’re going to sell it?’” Rush explained. “That has led, over 10 years, to them just putting band-aids on bigger problems with the house, and now, even if they’re in a position that they want to sell it, the house isn’t in that great of condition.”

BuHo residents are concerned about the uncertain fate of their program house. ResLife proposed moving BuHo to 230 Washington St. when plans to divest University homes first arose in the fall; however, a vote was held among BuHo members that ultimately resulted in a decision to remain in their 356 Washington St. location and to contest the University’s decision.

“Our residents are opposed to the sale of 356 Washington Street,“ Rush wrote in an email to the Argus. “We feel that instead of getting rid of a great property that is completely unique at this university, Wesleyan has the opportunity to embrace and support a large community and living space that could only get better, instead of worse.”

Members of the house who share these concerns have joined together to actively work toward raising awareness regarding the sale in order to gain support for their cause.

For Rachel Weisberg ’15, BuHo has become a peaceful getaway and safe haven from hectic campus life. Weisberg believes that consolidating campus housing would increase anxiety and isn’t conducive to the prosperity of the community.

“[The divestment] makes me sad,” Weisberg said. “I understand that it’s economically ‘better,’ but it’s just going to detract from the community. If the school continues to cut down on extra space for people to be in, I feel like everyone is just going to suffer.”

Isaac Silk ’14, another resident of Buddhist House, shares similar apprehensions regarding the long-term effects of program house divestment on the campus environment.

Rush, along with Weisberg and Silk, has been working with other students on Wesleyan Students Against Divestment (WeSad). According to a Wesleying post, the organization focuses on preserving BuHo and other Washington Street program houses.

The group is considering changing its original name because of possible confusion regarding what exactly is being contended. Members are still working to define the group’s main goals.

“We’ve had long discussions about really formulating our argument because it [consists of] nuances as to why we believe the house should still exist,” Rush said. “What we want to do next [is] just raising student awareness—to say what is happening and that it’s something that people should be upset about.”

The group has drafted a petition that they are asking students and supporters to sign and hopes to gain publicity through events. It also aims to continue discussions with ResLife, Physical Plant, and other administrative groups regarding future alternatives and solutions.

Weisberg hopes that more action will be undertaken during the beginning of the current semester. For now, they aim to get more people involved and onboard with their cause.

“BuHo has kept me at Wesleyan,” Weisberg said. “I am scared of what Wesleyan will become [if program housing continues to be threatened] because I want to leave a school that I’m proud of and that I can say that I went to, and I feel like the [University is increasingly taking] the course of… a thing that has to more do with money, success, and ratings and less about how happy and sane the students are.”