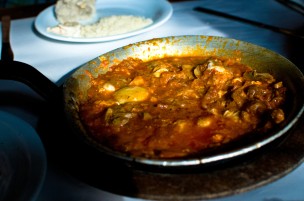 People look for different things when they travel—some look for the most historical sights while others seek out the most picturesque views. When I travel, I look for one thing: the best food I can possibly find.

Over break, I toured traditional and historical sights around Israel. I was told that it was my birthright as a Jewish citizen of the world that I should be able to visit the Jewish state in the Middle East. Naturally, I felt that my personal birthright—as a foodie more than as a Jew—was to explore the local foods in order to become more in touch with my foodie heritage.

Upon arriving in Israel, I was mildly dismayed to find that there is no such thing as Israeli food. What’s the point of establishing a country if there’s no food upon which to base it? Since Israel is such a young country (going on 65), but surrounding cultures are so old, Israeli food is really just an amalgamation of local food.

Throughout the last 2000 years, the land that is now Israel has been occupied by Roman, Turkish, Persian, Arabic, and British people, among others—not that the Brits contributed much to the cuisine of the area—and when it was founded as Israel in 1948, a large influx of Jews from around the world immigrated to the area. As a result, Israeli cuisine is a jumble of foods from all over the world, within reason.

Most of what we Americans see as “Jewish food” is actually Eastern European, and Israelis don’t really like it. Chicken soup is flavorless broth, and who ever thought noodle kugel was a good idea?

Rather, regional Israeli food is a blend of what we typically think of as Middle Eastern and Mediterranean. That is to say, it’s a combination of Afghani, Iraqi, Turkish, Lebanese, Jordanian, Syrian, and Greek cuisines. Falafel and shawarma are always available, hummus is served with every meal, and a delicious salad of tomatoes, cucumbers, olive oil, and parsley accompanies everything. Fresh vegetables abound while fruit isn’t the most popular food group, and bread is everywhere.

After ten days in Israel and now a few weeks at home, I often find myself craving two things: hummus and shakshuka. If you’ve never had shakshuka, please stop what you’re doing. This may be a life-changing moment. Drop the rest of this Argus (keep this page for reference), and immediately relocate yourself to a kitchen. Any kitchen. You don’t even need that many cooking appliances.

Shakshuka is an easy-to-make, small-investment, single-pan creation that can easily be made for any-sized group of friends. It’s essentially poached eggs in a reasonably simple tomato sauce. All ingredients can be acquired from Weshop, and it looks super fancy. Just remember to buy a full loaf of bread to mop up the sauce.

Chile or jalapeño peppers, to taste

Salt and pepper, to taste

Directions
1. Heat oil in a large skillet over medium-high heat.
2. Add onions, peppers, garlic to hot oil. Sauté until golden brown and soft.
3. Add canned tomatoes, complete with liquid plus another 1/2 cup water (feel free to add another small can of diced tomatoes. I did!). Spice to your heart’s desire, and simmer on medium heat until slightly thickened, about 15 minutes.
4. Crack eggs, distributing evenly, over sauce. Cover skillet, and cook until eggs are set, about 5 minutes.
5. Sprinkle with feta, and serve with warm bread. Enjoy!