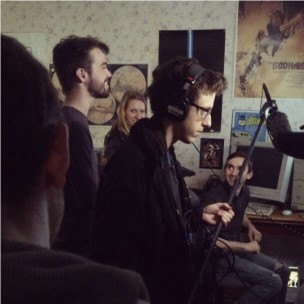 While many Wes kids spent their fall weekend mornings sleeping in, some senior film majors were hard at work. Those who chose to direct or work on thesis sets—and many do both—spent long days making the director’s vision, the actors’ hours of rehearsal, and myriad logistical details come together.

In this second installment of The Argus’ series on film production theses, student directors share stories about their shoots.

“It went really, really well,” said Gabriel Urbina ’13, who is directing a musical. “We had no major disasters; nothing that was just kind of like, ‘Oh, dear God, how are we going to deal with this crazy injury, crazy thing?’ I feel like the closest thing we had to a really big problem is one of our actors had a minor cut on his hand that started bleeding like a little tiny bit right before we were gonna do a close-up of his hands… Everything else went really, really fine. We finished not only ahead of schedule, but a full day ahead of schedule.”

Sam Barth ’13 reported that his four-day shoot also went more quickly than expected. He attributed the smoothness of the process to the people with whom he was working.

“I had a good crew, and as soon as I got to set I felt so good about the casting choices,” he said. “Everyone was good during rehearsal, and then on set everyone just clicked in the way I had imagined it, which is great… I feel like casting is just something you want to rush through, but I was trying to think about how people would work together.”

Jenna Robbins and Will Feinstein, both ’13, felt that the fact that they chose to write and direct comedies contributed to a lighthearted and fun atmosphere for the long days of shooting.

“We just were pretty goofy most of the time,” said Robbins, whose film centers on a girl who falls in love with fictional characters. “I mean, goofy and productive at the same time, but…watching people transform into recognizable characters is really fun and I think made everyone pretty excited. I mean, we had people in Harry Potter costumes with wands and things like that, so it definitely makes a sort of jovial atmosphere.”

Feinstein’s film, a high school movie that is intended to play with the conventions of the genre of high school films, also included a jovial scene that many high school and college kids know well: a party. Shot in his producer’s backyard on Home Avenue, the party scene looked very realistic.

“We have a lot of people, red cups, kegs, all that, and it looks like a real party,” Feinstein said. “I guess we [were] kind of loud—it’s probably the song, because there’s a song that happens—and at some point I’m yelling directions or whatever and some dude two doors down, two or three doors down, it was like an older dude, just started screaming like, ‘Shut the fuck up! What are you doing? This is a quiet street! Go back to Fountain! Get the fuck out!’ We all thought it was a joke for a second, [and then] were like, ‘Oh no, this is real.’ And then we did the entire rest of that shoot in whispers that night.”

Several of the directors reported facing similar small, unexpected problems, but they were able to work around them and keep their shoots running smoothly. Feinstein and Barth noted that the cold weather brought concerns but proved to be a surmountable obstacle.

“Three quarters of my shoot took place in this one house on Mount Vernon Street [where] there’s no heat or running water, so everyone kind of bonded a little bit,” Barth said. “A constant thing through the movie was trying to find where we could set up lights and where we could set up space heaters so that we wouldn’t keep tripping the fuses. It was never really that bad because the weekends we were shooting weren’t that bad, so minor adversity brought us together.”

The Film Department’s requirements for the production thesis dictate that students must be done shooting by the end of the fall semester, so the directors are now onto the next step: deciding which shots from their hours of footage will make it into their 12-minute movies. The process of editing is different for directors who chose to shoot on 16-millimeter (mm) film, like Robbins and Urbina, than for directors who shot digitally, like Feinstein and Barth. Yet all of the directors have common fears about the editing process.

“Editing’s fun,” Feinstein said. “It’s also scary because it’s like, what if I run into something where…the scene can’t be put together, there’s just like something I’m missing, or I have to think of some really creative way of how to show this because I’m missing a shot, or this doesn’t match up, or it’s not the way I exactly wanted it. So it’s scary to think I could run into issues like that.”

He added that, on the whole, he finds digital easier when it comes to the editing process.

“I’m glad that I’m shooting in digital, because it’s just [from] here on out much easier,” Feinstein said. “It was much easier to shoot too, probably, because you can shoot as much as you want. For editing, you can see your changes instantly. You can change things so quickly, and that’s amazing. I don’t know if it’s an advantage over film, but it’s definitely easier.”

Directors who shoot on 16mm must send their film out to be developed and processed before they can begin to edit.

“I’m nervous about getting the film back, as always, because that’s the spooky aspect of doing darkroom photography or filming on film—that there’s always sort of that chance of oh, some weird setting was off in the camera and then everything was underexposed, and it’s completely black,” Urbina said. “So it’s always a little nerve-wracking even if you double-checked, triple-checked everything to be waiting on film and just be like, oh God, I don’t know how it looked.”

Directors who shoot on film also have the added chores of cataloguing their shots and sound syncing, during which they have to align their audio to the film.

“I’m not sure which one it is, but it’s definitely out of one of the circles of hell,” Urbina said. “You know, like some people get punished to do sound syncing for the rest of eternity… It is a process of going frame-by-frame and just syncing sound and then thinking that you got it right and then playing it back and realizing that you were like two frames off at some point but you’re not sure where. It really is sort of the equivalent in film of, if you’re a computer programmer, going through your code looking for a missing closed parenthesis.”

The directors pointed to the advantages and challenges posed by the difference between thesis film sets at the University and professional sets. Barth remarked that at Wesleyan, people have space to experiment and learn on set.

“People [on the crew] were so down to try new things out, learn things,” he said. “That was definitely the coolest part of the thesis shooting…sets in the real world aren’t as educational or fun…like I was shooting my buddy’s film and we would just talk about it and plan it out, like, ‘What if we tried putting the light here for this shot? And then when we flip around we need to flip like this, right?’ It’s just something you talk about, and it’s very collaborative. It felt cool. It felt good, like, yes, this is what making a movie should be like.”

Feinstein was similarly impressed by the way people came together to work on his thesis even though, unlike in the professional film world, his crew did not get directly rewarded for their time and work.

“I can’t believe how many people were working for me on this thing for free, for very little actual gratification for themselves, and that’s kind of a thing I had to be thinking of the whole time: everyone’s doing this as a favor, basically,” Feinstein said. “That’s a crazy thing about how the system works. Once you graduate, you don’t get free labor anymore.”

The fact that people’s work on thesis sets can go unrecognized poses a challenge for directors trying to find people to help on set.

“Putting together a crew is kind of difficult because people don’t really get any kind of credit for working on thesis films,” Robbins said. “I’m also a theater major, and when you work on somebody’s theater thesis, you get credit for it. I had people that I’d lined up that dropped out on me because it’s the end of the semester, [and] people are really busy.”

In fact, Robbins needed to replace her director of photography at the last minute. Although Spencer Burnham ’14 had never shot on film before, Robbins said that he rose to the occasion and did a great job.

When directors can pull together a good crew, it pays off in both the quality of the final product and the experience of shooting itself.

“It was just really fun being there with everybody, and having everybody work together, and seeing the script come to life, and just having people cooperating and having fun and laughing,” Feinstein said. “Tensions got stressed—not really—yeah, it was great. It’s fun to make things with people and have everybody working for something.”

Although production thesis students may be less stressed this semester as the filmmakers shift from managing dozens of people to making more individual editing decisions, there is a bittersweet feel to the final call of, “That’s a wrap.”

“There’s a lot less constant low-level panic in my life now, but on the other hand, it’s become a lot more about boring things, like school,” Barth said. “It’s less exciting.”