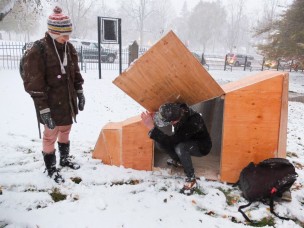 A small crowd gathered in the warmth of Russell House at 4 p.m. this past Wednesday, waiting for Will Wiebe ’14 and his new, temporary home, which turned out to be an oak structure approximately 6 ft. by 3 ft., shaped a little like a sarcophagus.

We were all there to see Wiebe off on this experimental adventure in cold-weather fortitude and performative art. He had announced his plan a few days earlier to a group of students via an email titled “Open House at Russell House.”

“I’ve recently finished building a piece for my sculpture class—yet the project is still not complete,” Wiebe wrote in the email. “My object is, in part, intended to exist in dialogue with its surroundings: how else might I adequately highlight the implications of reclaiming space?”

Wiebe continued his email with an invitation to join him on the lawn of Russell House for the placement of the oak structure and the start of the experiment.

And so I found myself waiting with a group of students on Wednesday afternoon, looking out the windows of Russell House into the flurry of snow, waiting for Wiebe and his tiny house. Finally, at about 4:20 p.m., one of the gathered students called out “he’s here!” and we all trudged out into the snow and blustering wind to find Wiebe and a few others pulling the structure into the yard. After commandeering a few of us to help him get the structure to his desired spot on the lawn, we stopped to admire his project.

Wiebe showed us around his piece, opening a small door and climbing in to peer out at us through a square window. He explained that the building was insulated, and that he plans to sleep there for about a week, or until the administration removes the building, whichever comes first.

As the temperature dropped to around 29 degrees and my freezing fingers struggled to press the buttons on my camera, I found myself hoping that Wiebe knew what he was doing as far as basic wilderness skills like not freezing to death at the beginning of a chilly Connecticut winter.

I asked him how he expects to survive without a bathroom or light.

“I figure I can probably hold it between now and the morning,” he said. “I’ve got a flashlight. I’ve got a bottle of water, I’ll be calling upon friends.”

But Wiebe had thought about more than just the basics of how he would live out in the cold for a week. When I asked him to tell me about his project, he explained the theory behind his piece.

“How do we, as artists and as human beings, interact with the space we live in?” Wiebe asked. “So I started thinking of course of home, and the original space we grew up in, and how our western notion of adulthood is characterized by leaving behind a physical representation of home, and what it means to be in a permanent state of transience as I have been for the last three years, living in a place that I know I will never live in again, and how do you make a physical representation of a permanent state of transience.”

Wiebe explained that the structure was also meant to reference the relationship between his own transition and the international economic transition, which has thrown so many people into transitions of their own.

“I wanted to connect it, too, to the physical circumstances of this space, getting back to the original displacement of Middletown,” he said. “It’s of course a bunch of white people taking land from Native Americans.”

Wiebe explained that the materials of the structure were meant to reflect this connection, as the structure is made of oak with a polyurethane finish. Oak bark, he explained, was a material used in wigwams in Middletown before the influx of white settlers.

“But it looks like it’s made of sort of shitty, prefabricated materials,” he said. “And that’s sort of how we, as a society, deal with our problems. We slap a coat of paint on them. We shove the homeless people out of the part of town where the rich people are going to walk through and we don’t really have a substantive conversation about what all of it means.”

Wiebe also said that the shape of the piece, which resembles a coffin or sarcophagus, was meant to signify a final resting place of private property values. He then explained how the structure was also meant to be a statement about the legal barriers surrounding space.

“The two signs on the door are the sections of the student handbook that bar symbolic structures and a land permit for Middletown,” he said. “Coming from a place of privilege, you don’t realize all of the things that inhibit people from obtaining something as simple as shelter.”

Wiebe said that he recognizes the realities that surround his piece, particularly his place at an expensive, private university.

“I’d also like to acknowledge that, while I’m commenting upon privilege, the very fact of this structure sort of represents the privilege I’m coming from,” Wiebe explained. “So much of our western notion of property rights is grounded in this misconception that there was some original owner who the deed was passed down from when really, at least in this country, it’s been based largely on theft. And to think what does it mean to reclaim a space. What does it mean that there’s a gate running around here? What does it mean that if someone from Middletown wanted to do this they couldn’t do it, or they would run into different barriers that I wouldn’t run into?”

As of the writing of this article, the structure was still on the lawn of Russell House, and Wiebe confirmed that he has not changed his plans to sleep in the structure for the remainder of the week.