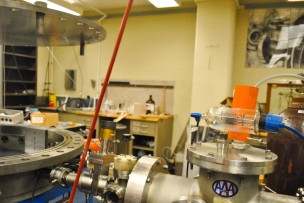 While most Wesleyan students scatter during the summer to take on internships or jobs, travel, take classes, or even do all these things at once, a select few remain on campus. Some take classes, but many assist in groundbreaking research. University labs are typically in progress year-round, but the summer offers a unique opportunity for both professors and students to delve deeper into specific fields. Over the course of the semester, The Argus will be profiling the research being done in the sciences during both the summer and the school year.

Our first stop is the Physics Department. In this dynamic department, students and professors experiment with quantum mechanics, plasma, lasers, and the superfluidity of liquid helium in order to develop new theories on the natural world and, in some cases, enhance our ability to fight debilitating diseases.

Associate Professor and Chair of the Physics Department Brian Stewart is researching molecular dynamics and hoping to understand the different kinds of motion that can occur as atoms collide. He conducts the experiments by exciting lithium molecules with lasers and later modeling the results on the computer.

“We feel confident that we understand what’s happening when we have a model that gives us the same results as what we see in the lab and when we feel we really understand what’s going on physically,” Stewart said.

Stewart’s lab spent this summer analyzing new data that he hopes will shed light on some interesting phenomena he has observed.

“It’s pretty pure physics, in the sense that we’re really trying to understand a fundamental process,” Stewart said. “I think when you realize that you’re looking at something that isn’t obvious and that no one has ever realized before, that it is very exciting. Those moments are uncommon, but they’re really very exciting when they do occur.”

Professor of Physics Lutz Hüwel’s research focuses on molecular physics at high energies and is divided into two labs: photophysics and plasmaphysics (“plasma” refers to gases at very high temperatures, not, as in biology, to a part of the blood).

“With photophysics, we’re exposing molecules to light, controlling the light, and seeing what happens,” Hüwel said. “Plasmaphysics comes up in a new area called plasma medicine, which is still really in the lab stage. There are net direction applications, and yet also connections to basic questions in physics.”

Just as one can create flames by aiming sunlight through a magnifying glass, Hüwel explained, one can achieve a similar effect by focusing a laser beam on steel. The latest stage of his research involves doing this in water and observing the light effects created in the fluid.

“What we saw was something completely different from what we expected,” Hüwel said. “We saw little bubbles, strung out like pearls—very bright. I thought it was some misalignment. That’s what happens sometimes—you just stumble into it. It’s just fun; it’s a big puzzle, and I like the possibility of this having applications.”

Not everything has a utilitarian end for Hüwel, however.

On the more material side of physics, Assistant Professor of Physics Christina Othon is researching the dynamic measurements of structure and organization of soft condensed matter systems. She is trying to understand how the dynamics and properties of passive solvent molecules can organize and stabilize protein structure.

“When proteins do not form the correct protein structure, terrible diseases can result, such as Alzheimer’s disease,” Othon said. “By understanding the role solvent plays in the folding process, we better understand how such diseases arise, which could potentially lead to new therapies.”

This summer, Othon’s lab worked on improving the signal strength and stability of its microscope. They also began a new research project, which is trying to alter the water dynamics around proteins to allow a researcher to control and manipulate protein structure.

Associate Professor of Physics Francis Starr studies soft condensed matter physics, focusing on computational and theoretical approaches to those systems. Starr is currently on leave and thus was unavailable to speak with The Argus. Associate Professor of Physics Greg Voth, also on leave, is researching the dynamics of soft condensed matter and fluid systems.

Back on campus, Foss Professor of Physics Thomas Morgan has his lab working toward understanding the behavior of large, exotic molecules, called “giant molecules.”

“Think of it as hundreds of laser pointers aimed straight at a lightning bolt,” Morgan said, attempting to distill for a non-science mind the mechanics behind his lab’s experiments.

He hopes to understand both the fundamental behaviors of such molecules and their applications, which lie in the area of quantum mechanics.

“By addressing these simple molecules, I can perhaps provide some fundamental knowledge that is useful in the fields of quantum physics and information theory,” Morgan said.

Morgan’s lab spent this summer preparing a cutting-edge laser system, purchased with funds from the National Science Foundation, which it will use to excite the molecules with which they are dealing.

“A lot of things have to come together in order to get the molecule to that state,” Morgan said. “When it happens, the door gets locked on the lab: nobody can leave. Everybody’s got to stay there until it’s done. There’s a fifty-fifty chance that [the state we’re looking for] exists. It’s really risky.”

Professor of Physics Fred Ellis’s research, like Morgan’s, is related to quantum mechanics: he is studying liquid helium.

“In the liquid state, helium atoms fall into a very low energy state,” Ellis said. “It’s much like light particles falling into a coherent wave state in a laser beam. I’m hoping to understand the physics of how the helium atoms interact with each other by studying their macroscopic behavior.”

Ellis has been researching this area of physics since he was a graduate student himself, when he worked in a research lab that did similar experiments on superfluid helium. The graduate students working in his lab maintain the day-to-day operations of the lab, while undergraduate students, who tend to work with the lab for shorter time spans, are responsible for analyzing previously collected data.

This summer, the students working on his research also collaborated with Associate Professor of Physics Tsampikos Kottos on his theoretical research on waves.

“With waves, we are sensing the environment around us, communicating, and doing all things possible,” Kottos said. “I am trying to understand how these waves are propagating in very complicated environments.”

Much of Kottos’ work is theoretical, and he said that he thrives in a constantly stimulating and challenging environment of intelligent minds.

“The students [who work with me] play the most important role,” Kottos said. “I’ve had the luck to work with extremely bright undergraduate and graduate students. They keep me alert. They give me life.”