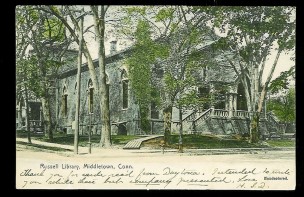 If you only study and check out books and DVDs in Olin and Sci Li (and maybe Art Library if you’re super adventurous), then consider expanding your horizons.

Russell Library, a town institution on the corner of Court Street and Broad Street, is a former Episcopal church that has retained its heavy stone exterior and stained-glass windows. The library was established in 1876 by Frances Russell in memory of her husband, Samuel, after whom Russell House on campus is named.

The interior of the library—with white walls, multiple floors of resources, and several study spaces—is less intimidating than its façade.

In general, its collection is not exhaustive as Olin’s, but is impressive nonetheless—especially when you realize that the DVD collection beats the one one on campus.

According to librarian Christy Billings, many Wesleyan students come for the DVDs. She said that students also commonly leave with stacks of ten nonfiction books (the check-out maximum).

“In May, at the end of the semester, they’re coming for the DVDs,” she said.

According to information desk librarian Brandie Doyle, one of the main differences between an academic library like Olin and a town library like Russell is that a town library provides a different type of collection. She pointed out that many students at college libraries use resources specifically set aside for their classes, but Russell Library caters to a more general population, and its collection reflects the needs and desires of that population.

Billings is surprised that more students from the University do not come to Russell. Although a total of 1,068 Wesleyan students have registered library cards with Russell, many of those cards are inactive.

“Usually, students come for the first time as freshmen, and then they learn that they can use their library card for all four years,” said Francis Crescimanno, who was worked at the library for 14 years.

The process of registering for a card is simple, and cards can be renewed annually.