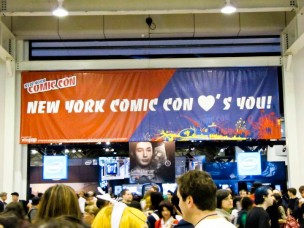 Last year 96,000 fans swarmed upon the Javits Center in Manhattan to gorge on a veritable feast of geekiness at New York Comic Con. I was luckily among them. It was a fantastic experience last year, and thanks to my position here at The Argus as Arts Editor, I’ll be going again—only this time with a press pass, granting me an extra day of exploring the exhibition floor and access to certain exclusive interview panels. Woo!

For those of us on the East Coast, the New York Comic Con is usually as close as we can get to the more star-studded annual cons: Atlanta’s renowned Dragon Con and San Diego’s highly commercialized SD Comic Con. Once a year NYCC brings all the top fan-motivated industries—comics, sci-fi publishing and films, video games, cosplay, anime—together in a place where they can shamelessly promote their new products and releases to the collective amazement of those of us sad creatures who fixate upon their every move. I don’t think there is any group of people more zealous to meet the stars and creators of works they cherish than geeks and nerds. So, for one weekend in October each year about 100,000 crazies descend upon one building to attend panels, get autographs, buy excessive amounts of merchandise, and mingle with people who, like them, just so happen to enjoy dressing up in a Starfleet uniform from time to time. I can tell you from personal experience, it’s marvelous.

This year’s Con brings quite a few highly anticipated guests to lead the regularly scheduled panels fans may choose to attend, that is, in between scoping out Autograph Alley and basking in consumerist glory of the show floor. For starters, there’s the celeb talent, bona fide geek royalty, like Eliza Dushku from “Dollhouse,” Felicia Day of “Dr.Horrible’s Sing-Along Blog” fame, and even Star Wars legend Mark Hamill. Then there’s the novelty acts, like Kevin Sorbo from the 90s cult-hit “Hercules” series and Frankie Muniz…oh, Frankie Muniz.

And that’s only the flashy side of the many discussions that will be happening over the weekend; technical panels by renowned organizations and artists get just as much hype. Especially anticipated is the Theonering.net’s “The Hobbit” update panel—the first chance fans of the Lord of the Rings franchise have had in years to get really excited about something Tolkien related. Throughout the weekend there will also be presentations by Marvel, DC Comics, Del Ray, Dark Horse, and MTV. Personally, I’m really excited for the Harry Potter-NYC panel on wand dueling. That’s educational, right?

But only part of the fun comes from attending panels—there’s also swag, a fundamental element of any good Con. Yes, one of the many delights of attending a convention of this size is how much free stuff gets given away by industry professionals. Tor Publishing hands out copies of their new paperback releases on the hour, independent comic distributors thrust their latest releases upon each and every passerby, and any exhibitor worth their salt displays promotional buttons, pens, lanyards, posters, and window clings to lure you to their respective booths. Some part of me wants to object to the rampant consumerism and commercialization…but let’s be real, I love free stuff.

So that’s NYCC in a nutshell—geeks, celebrities, swag. I’ll spend my weekend perusing booths, interviewing semi-famous people, and taking pictures of attendees’ outlandish costumes. Worth spending my pre-midterms weekend at? I sure as hell hope so.