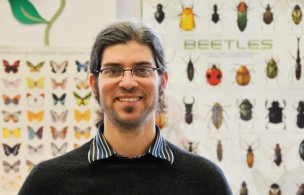 Michael Singer, also known as  Dyn-o-mike (but we’ll get to that later), is an Associate Professor of Biology and Environmental Studies. This semester, he is teaching “Conservation Biology” and “Evolution Journal Club.” Aside from teaching, he has conducted major research on the ecology of plant-insect interactions, namely self-medication by caterpillars. He also likes to dance to soul and funk, sketch nature, and eat oranges.

The Argus: What’s on your bookshelf?

Michael Singer: You can see that most of my books have to do with plants and animals—there’s one on primates. I study caterpillars and their ability to self-medicate when they become parasitized, and I was looking to see if primates had any of the same characteristics.

A: Is it just part of their chemical makeup?

MS: In the lab, we are able to take caterpillars and parasitize them with flies. We found that once they are parasitized, their tongue becomes more receptive to the taste of certain leaves. These leaves contain antibodies that treat them.

A: So how did you get so interested in caterpillars?

MS: It started with childhood. I’d just observe butterflies and want to sketch them…I didn’t have the motor skills to do that so well at such a young age but I kept on doing it as I grew up. I actually collected butterflies for a while but I didn’t want to see them still—I wanted to observe them in nature. So I convinced my parents to grow milkweed in the yard to attract them…I was probably the only person in the neighborhood who wasn’t trying to ward them off!

AZ: What was your favorite animal childhood movie?

A: I love that movie. My favorite was the Lion King though.

MS: I actually saw The Lion King the first time as a graduate student in Panama.

A: What were you doing in Panama?

MS: I was doing field work, sometimes just sitting for six hours at a time observing nature. I was part of an institute that tried to track biodiversity in tropic zones, namely tropical rain forests.

MS: Yeah, and I’m scared of jaguars, so sometimes I’d psych myself out and get out of there!

A: What’s the favorite natural site that you’ve been to?

MS: I’d have to say the tropical rain forest. Once you’re really in the zone, you notice so many things going on all around you. The Grand Canyon is great and iconic but I love the complexity and little details of the rain forest. I do like sitting in deserts though. I grew up in Los Angeles and sometimes I would drive to the desert with a couple of friends. I’d have transformative moments sitting on this rock that we dubbed the “Throne.” It’s amazing when you’re just looking out in this limitless desert in silence, with the occasional sounds of the flap of the ravens wings [makes flapping noise].

A: Since you’re a conservation biologist, are you against the killing of insects—like when people stomp on a cockroach or kill a fly?

MS: Well, if someone has caterpillars eating up their tomato crops, I’m not against it if they try to remove them. But I’m the type to put the caterpillar in a jar and feed it some leaves. I’m more against the mass killing of insects and disruption of nature in general…by industry and sometimes inadvertently by individuals. You don’t really think about it, but when you’re driving a car you’re killing a lot of insects. If we want to change people’s mind about how they’re treating nature, it’s going to take a couple of generations.

A: What are your hobbies?

MS: I still do sketching and drawing, and also photography. I like to listen to soul and funk…I actually co-hosted a radio show in college for six years.

MS: Well, one time I was throwing this old school dance party, and this guy called Starskee Suave came up to me and told me he liked my music…and I ended up being the assistant DJ on his radio show “Tough Tulip Audio Revival.” We’d get really into it and dress up for the show…he’d do the white suit and I’ll wear some bell bottoms and funky shirts. It was great: we’d go out afterward and some people would think we were in a band, but some people would actually recognize us from the show! Starskee gave me a name: Dyn-o-mike.

A: That’s fantastic. Is his name really Starskee Suave?

A: Do you think Dyn-o-mike will ever make a reappearance?

MS: You know, I go back to Los Angeles for breaks, and Starskee has been saying that I should do a show or two with him…so you might just hear me on there one night!