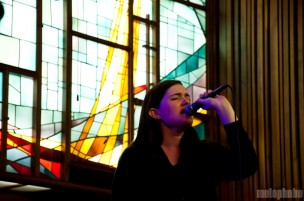 Find yourself tiring of the sweat-soaked halls of Eclectic? Fiending after a new mid-week music fix? Psi U ruit lost its punch? Well, after a slight lull, Concert Committee has got you covered. This Thursday at 8:30 p.m., this juggernaut of a concert season is back in full swing, bringing otherworldly chanteuse Julianna Barwick to Memorial Chapel. Since 2009, Barwick has made a name for herself churning out ghostly, ethereal pop magic. Gorgeous, slow-burning, and utterly incomprehensible, Barwick loops her unearthly wail over sweeping, minimalist synth drones, aiming for the heart and the tear glands and hitting the spot. Think Enya for the skinny jean set, Justin Beiber slowed down 800 percent, or a one-woman Sigur Ros your mom might dig. It’s ambient music without all the tortuous meandering—her neo-New Wave arias induce chills, raise goosebumps, and will keep you entirely enraptured.

Barwick forged her angelic, mysterious voice in the fires (and choirs) of rural Louisiana churches, before moving to the crucible of all things hip, Brooklyn, where she incorporated influences such as Cocteau Twins and Björk into her style. Starting out in 2006, Barwick released two mini-albums of mesmerizing loops and cosmic vocals, Sanguine and Florine, grabbing the ears of indie-folk overlord Sufjan Steven’s Asthmatic Kitty Records. They dropped her debut album, the aptly titled The Magic Place, in February 2011, garnering an elusive “Best New Music” tag from Pitchfork and a spot on Metacritic’s “Best Music of 2011 So Far” list.

“The Magic Place was a tree on our farm,” wrote Barwick on Asthmatic Kitty’s website, elaborating on her new album, “It was in the back pasture. It was one tree that grew up, down, and around. You had to crawl in and once you were inside, it was like there were different rooms, and you could actually lay in the branches. We named it ‘The Magic Place’ because it really was magical—especially for a kid…and that’s how I feel about my life right now—without trying to sound too hippy dippy or cosmic, this year has definitely been a magical one.”