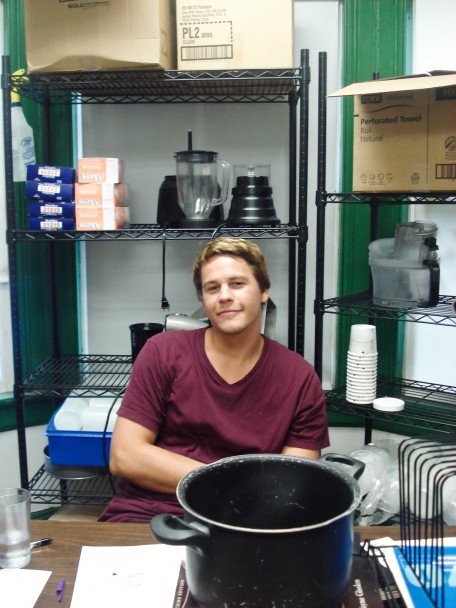 In his fifth year of cooking up meals in the kitchen of Alpha Delta Phi Literary Society (Alpha Delt), Executive Chef of Star & Crescent Eatery Ryan Talbot,  spoke with The Argus about upcoming changes to the S&C menu, his days as a Rastafarian, and surfing.

Argus: So what’s new in Star & Crescent this year?
Ryan Talbot: We repainted the walls and ceiling, repaired the cracks and new drapes are coming soon. We also graduated a lot of seniors so there is a lot of new help in the kitchen.

A: Is the menu changing at all?
RT: We will have the same types of menus this year with one or two new things a week. I’ve come to learn that people expect the S&C classics, like enchiladas and roasted chicken with shallot sauce and mashed potatoes. We are very Mexican-dominant, we kill it every time. It always sells out. For some reason, Thai curry has died down, but I still can’t figure out why. Some days I’ll cook a dish, and it will sell out instantly, and then I’ll cook it again the next week and we will have leftovers.

A: Where did you learn to cook?
RT: I went to Connecticut Culinary School, which is a really small school with a lot of talented chefs.

A: Where did you work after that?
RT: I was a practicing Rastafarian at the time, so I started working at a vegan Rastafarian restaurant in Hartford called Kebra Negast. We cooked Jamaican-Ital cuisine. The owner was a Rasta so he showed me a lot of his mom’s recipes and I learned a lot that way. I was also in a reggae band so I was hanging out with a lot of Rastas.

A: Do you bring any of those influences to the Star & Crescent kitchen?
RT: Not that many, but the jerk chicken/tofu is Jamaican. Rastas really like Ital stew, but I don’t think Wesleyan would like it. Every Rasta has his own recipe that they swear by. The one I learned has a base of root vegetables, like squash, sweet potatoes, and pumpkins, as well as scallions and coconut milk. But every Rasta meal has to have the three basic spices: thyme, garlic, and allspice.

A: Allspice?
RT: Yeah, allspice is really important, and they use a lot! Just pour it on. Saute the aromatics, add the root vegetables, then the scallions and coconut milk and stew all together. Then you can add whatever type of greens you want at the end and float them until they wilt in the heat.

A: What was the band you said you were in?
RT: It was called Soullive, but the band broke up a few years ago and now I mostly do studio work with a lot of Jamaican artists.

A: You said you used to be Rastafarian, but what happened?
RT: I am still Rasta in my heart of hearts, but I don’t wear dreads anymore. I still love reggae the best, but strict Rastas are completely vegan and I do eat dairy now. I used to eat poultry but now I’m moving back to vegetarianism. It’s crazy how meat makes you fat, man!

A: So where did you work after that?
RT: I started working at Russel’s Creative Global Cuisine. The executive chef was classically French trained, but all of the guys in the kitchen cooked more ethnic foods. That’s where I learned everything else I know. I learned more there than I learned in culinary school. I learned how to cook for mass numbers, and I learned how to cook Mexican, Indian and Thai food. A couple of those chefs were so good.

A: Why did you leave?
RT: I started butting heads with Russell, so my wife wrote up my resume and sent it out everywhere without me even knowing it, and we went on vacation and when I came back I had a ton of calls and one of them was Star & Crescent.

A: Why did you choose to work at S&C?
RT: I was really interested in being a frat or society chef. I was almost ready to quit the food industry all together because I was getting isolated, I didn’t have enough time to see my friends and family, I had to work on holidays and the hours were crazy. S&C seemed great and they gave you the weekends off and every single holiday.  The application process was really competitive. They interviewed almost 40 chefs. There was an phone interview, in person interview and meal.

A: What did you cook?
RT: I made baja fish tacos. They loved it. Also, I charmed them.
Random guy: He did.

A: So what did you do this summer? Hang out with Aaron a lot?
RT: I worked at a golf course and surfed all summer. I’m a huge surfer. We go to Rhode Island.

A: Do you cook when you go home?
RT: I’m always way too burnt out when I get home so we mostly eat take-out. I love Japanese. But at least once a weekend I’ll cook something.

A: Did you always know you wanted to be a chef?
RT: I went to college to be an art teacher. After two years I dropped out because I got involved in my reggae band. We toured for five years, but we didn’t make enough money and everyone was like, ‘hey, what are you doing with your life?’ So I went to culinary school.

A: What do you want everyone to know about the Star and Crescent?
RT: What we stand for–that we have a comfortable atmosphere with home cooked food. Can you find that anywhere else on campus? Come eat here! It’s the best on campus.